The Jewish Home Family is celebrating 100 years since its founding with a series of events, including lectures, film screenings and concerts – open to the public, inviting the community to join in looking ahead to the future of caring for our aging population.

“Over our 100 years, we’ve changed locations, we’ve evolved, we’ve added services,” says President/CEO Carol Silver Elliott. Indeed the organization has come a long way. It began as an orphans’ home in Jersey City in 1915. In the 1930s, recognizing the needs of the elderly, it enlarged its function and name, becoming the Hebrew Home for Orphans and Aged of Hudson County.

Growth continued in the 1950s with the addition of hospital services for the chronically ill and the introduction of rehabilitation in the 1960s. In the following decade they introduced the first adult day care program in NJ and then a nursing home.

Using the centennial as a springboard, plans are underway for program, service and facility growth. “We’re excited about the future and continuing to understand and proactively meet the needs of our community,” says Elliott. In adopting the theme, “Our Next Century Starts Now,” the Jewish Home Family continues its tradition of recognizing the need to remain responsive and on the cutting edge of the delivery of services to the community’s elderly.

With that in mind, a number of events were planned for residents, family members, staff, and the community. Events so far have included forward-looking talk like “Are you a Senior, Boomer or Generation X? Who will be paying for your healthcare services?,” and a panel discussion on “Future Trends in the World of Aging.” There was also a screening of the documentary “You’re Looking At Me Like I Live Here But I Don’t,” filmed from the perspective of an Alzheimer’s patient- which was followed by a discussion with the filmmaker and staff from the divisions dealing with residents experiencing dementia at the Jewish Home Family’s two facilities. Another film on Alzheimer’s called “I’ll be Me” was screened free at a local theater. The documentary “How to Live to 101” was also screened for the community at the Jewish Home Assisted Living in January. 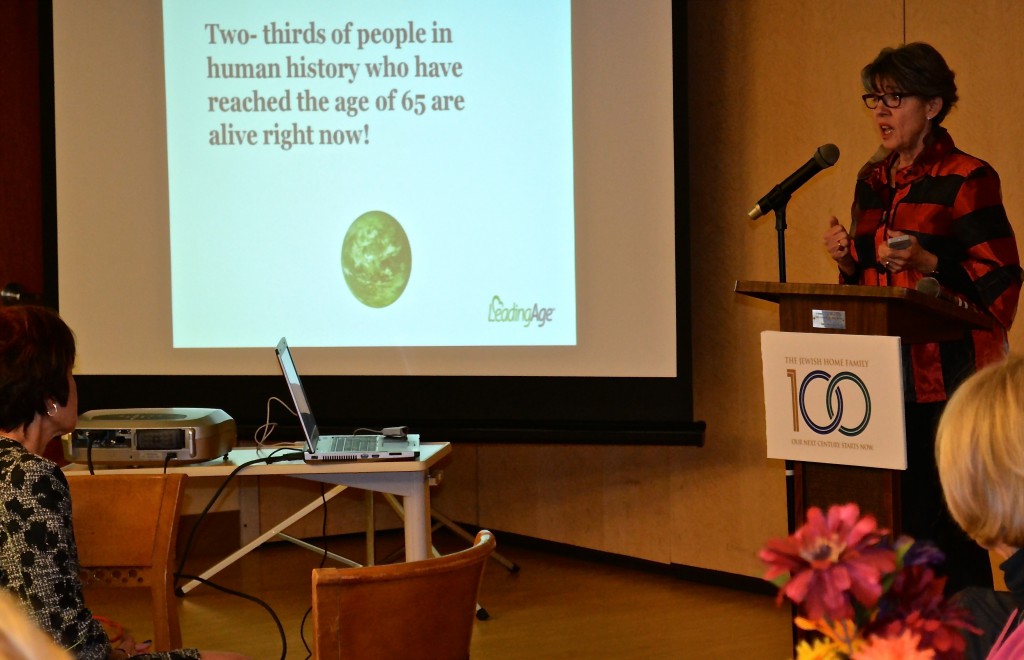 Robyn Stone, Executive Director of LeadingAge Center for Applied Research and Senior VP of Research, speaking about the future of healthcare costs at one of the Jewish Home Family’s recent Centennial events.

Upcoming events – free to the public – include:

– A concert by residents entitled “A Century of Song” – May 17, 2PM at the Jewish Home at Rockleigh

–  ‘State of the State’ with Theresa Edelstein, VP NJ Hospital Association and LeadingAge NJ Regulatory Consultant: “The world of healthcare keeps changing — what is the latest news in New Jersey? What do we need to know to help us prepare for the future?” June 4, 6pm at the Jewish Home at Rockleigh