Despite Differences in Age and Faith, Resident and Team Member at Palo Alto Community Bond over a Shared Egyptian Heritage

When Ginette Lisbonne-Young moved to Moldaw Residences two years ago, it didn’t take long for Zak Elattma to introduce himself. A chef at the senior living community for nearly 10 years, Elattma had heard their journeys to California both originated some 7,600 miles away in Egypt, albeit at different times and under different circumstances. 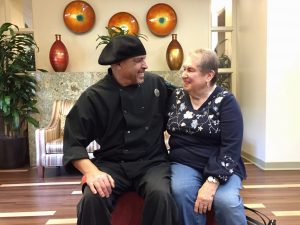 “He looked for me,” said Lisbonne-Young. “He’s such a warm and genuine person, we just immediately connected.”

At 19 years old, Lisbonne-Young and her family fled Alexandria, a city on Egypt’s Mediterranean coast, following a rise in anti-Semitism. Forced to leave virtually penniless, they settled in Paris while they worked with embassies and through official channels to apply for refugee status in the U.S.

“We paid a high price,” she said. “We had to leave my grandparents behind. My grandmother passed away six months later, and my father died within a year of our departure. My father was a staunch American, without ever coming to this country.”

After two years in the French capital, Lisbonne-Young, her mother, brother and grandfather received refugee status and immigrated to Manhattan, where they had relatives. The family settled in the Bronx, where Lisbonne-Young eventually married the brother of her best friend and raised three children.

“We truly had to start from the bottom of the ladder again and work our way up,” she said. Adding with her degrees from Oxford and Cambridge University, and the fact she spoke six languages, she quickly found her first position at Avianca, a Columbian airline in Manhattan. “The U.S. is amazing for hardworking people who are determined to climb their way up. This country really blessed us.”

Today, Lisbonne-Young is always on the lookout for “Chef Zak” in Moldaw’s dining room, who shares positive thoughts and greetings with all residents as they enter each evening. She says their relationship is like that of cousins, and despite their differences in faith and circumstance, it’s a friendship and familiarity she deeply values.

“There’s only admiration between us,” she said. “We share this sense of kinship. He’s a wonderful man; he really adds an extra bit of sunshine to our community.”

For Elattma, whose dream of a better life and educational opportunities for his children brought him to the U.S. 35 years ago, the feeling is mutual.

“We’re like family,” he added. “She’s a good friend, I feel very happy to see her. I share this happiness with her.”