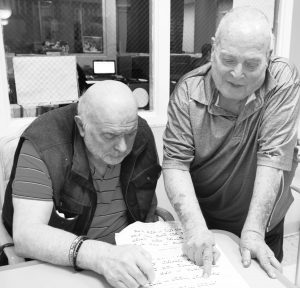 This article originally appeared in the Jewish Press of Pinellas County, FL.

Menorah Manor resident Anatoly Naroditsky fulfilled a lifelong dream on a recent Shabbat morning — one he thought impossible when he was growing up in the former Soviet Union.
Naroditsky was called to the Torah for an aliyah for the first time in his life, proudly joining Jewish people across the world as they received the same ritual honor.
It was a moment that touched everyone in the room. It was also a moment that Naroditsky once thought impossible.

“I grew up in the Soviet Union, where they forbid religious practice,” said Naroditsky who recently turned 71. “I couldn’t attend Hebrew school. I couldn’t become a bar mitzvah. I couldn’t even go to synagogue.”

When Director of Spiritual Care Rabbi Aaron Lever asked residents one morning if anyone wanted to learn how to have an aliyah, Naroditsky immediately said yes.
“It makes a big difference to feel part of the Jewish population,” Naroditsky said. “When I wear the tallis and say the prayers, I feel connected to the Jewish people.”
Fellow Menorah Manor resident Mel Blonsky eagerly offered to teach Naroditsky when he heard that he wanted to learn. 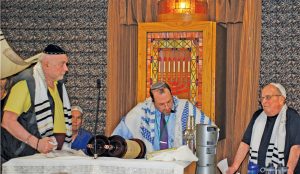 Together, the friends set a goal: Naroditsky would be ready to have his first aliyah by Rosh Hashanah.
Blonsky and Naroditsky started meeting for half an hour a few times a week after breakfast. They continued their sessions for three weeks, using a practice sheet that Rabbi Lever provided.
“One of the most gratifying things was watching him pick it up so quickly,” Blonsky said. “He was a very good student.”

With Blonsky’s help, Naroditsky was ready to receive his first aliyah, which fittingly occurred the day before Rosh Hashanah.

It was an emotional and proud day for Naroditsky and his family. His wife cried with joy after he recited the blessings, and the entire congregation shared a Shehecheyanu, a prayer said whenever doing something for the first time, to celebrate the momentous occasion.

Anatoly’s aliyah was just the beginning of his Jewish studies. He continues to study Hebrew weekly, this time with fellow resident Sonia Alessandrini, who just completed her adult Bat Mitzvah at Menorah Manor.

“This experience has made me feel very proud of myself, my friends, and the society we live in,” he said.