Humans of Crown Center–the Facebook phenomenon with a Tweak

Crown Center for Senior Living in St. Louis consists of over 200 apartments, an art studio, cafe, greenhouse, gardens and a fitness center. But we are more than the sum of our physical parts – it’s all about the people.

Crown Center is a community where we strive to live the Jewish value of “b’tzelem Elokim,” recognizing that each individual is special and has been created in the image of G-d.

We’re proud to introduce you to a few of the humans that are part of Crown Center. 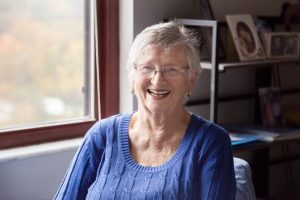 Surviving ovarian cancer  was a life-changing experience for Crown Center resident Miriam Roth. She accepts that there are things she won’t be able to do again, and she’s learned to appreciate “the small stuff.” From her top floor apartment, Miriam enjoys seeing the autumn leaves change, and the lights of downtown Clayton. She welcomes each day, feeling happy when the sun streams into her apartment.

They are the “ambassadors” next door. Simon and Marsha Koski live near Crown Center, and though they aren’t residents, they are part of Crown’s extended family. They invite friends and neighbors to Crown Center for meals, introducing them to the community. Simon says that one of the best things about getting old is that you have a lot to share. We’re fortunate that they want to share themselves with Crown Center. 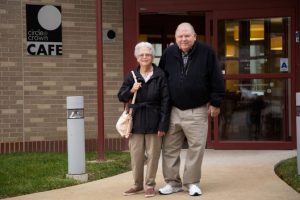 Klara Rybak is a “take-charge” kind of person. She has taken on a leadership role among Crown Center’s community of residents from the former Soviet Union, ensuring their participation in programs, especially for Jewish holiday celebrations and meals. Klara taught high school mathematics for over 40 years before immigrating to St. Louis. Her first graduating class of students invited her to their 50th reunion and she “attended” via Skype. Klara’s students continue to keep in touch – brightening her days. 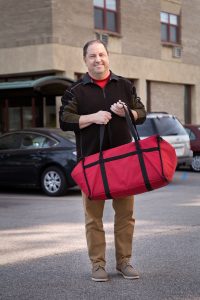 How beautifully ironic that as Marty Levy retired from a career in logistics management with UPS, he chose to become a volunteer delivery driver for Crown’s Kosher Meals on Wheels program. Though he won’t admit it, Marty is beloved by those who receive his “special deliveries.” He devotes many hours a week bringing fresh, hot meals to homebound older adults. He greets everyone with a kind word and a smile – showing that he cares. When Marty Levy knocks on the door, he delivers so much more than food.