In a special effort to share Gilbert and Sullivan’s most popular operetta with the elderly, The Atlanta Opera showcased a selection of songs from “The Pirates of Penzance” to residents and family members of The William Breman Jewish Home, patients in our Aviv Rehabilitation Center, and the residents of the two independent living communities on our Weinberg campus, The Zaban Tower and The Jewish Tower. 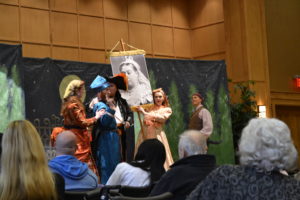 Four actors from the Atlanta Opera delighted residents with their mini-performance of Pirates of Penzance,
including the crowd-pleaser Modern Major General. 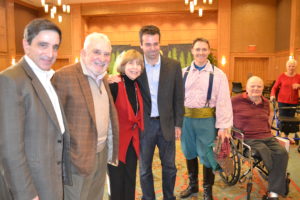 The performance was made possible by two longtime friends of The Home, pictured here (L-R): JHLC President & CEO Harley Tabak, Jerry and Jean Cooper, the Opera’s Musical Director and a performer, and one of our residents.

The program was made possible by longtime supporters of The William Breman Jewish Home and The Atlanta Opera, Jean and Jerry Cooper. A weekly volunteer at The Home for more than thirty years, Jean is a past board member and passionate about the care of those we serve. She firmly believes that music can be enjoyed by people of all ages, regardless of their physical or mental abilities. She spent months working diligently to connect the two organizations until her dream finally became a reality in late January. 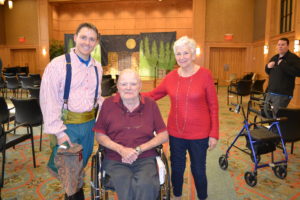 Residents from all our communities were able to meet and enjoy great conversation
with the actors at a dessert reception after the show.

The performance lasted about an hour. Everyone in attendance was mesmerized by the extraordinary music. Even those who didn’t consider themselves opera aficionados before the show gushed with praise afterward. Watching the faces of the residents as they took in the brilliant voices of the four actors, the innovative mobile sets and engagingly comical story made it a truly a magnificent afternoon. Afterwards, the residents were able to talk, ask questions and mingle with the performers at a lively dessert reception.

Typically, the Atlanta Opera presents their Studio Tour performances only at area schools to teach introductory knowledge and history of opera. Thanks to our friend, Jean Cooper, this was the first time they agreed to share it with a nursing home; and the first time a professional opera company has performed at The William Breman Jewish Home.

Leave a reply Click here to cancel the reply