Cat Tales: The Jewish Home of Greater Harrisburg Has a Cat Invasion

It was Saturday. On South Wing in the Jewish Home of Greater Harrisburg, Pa. The nursing staff admitted a new resident.

The woman had dementia—terrified and in a strange environment. She screamed and howled, tried to escape and defied all efforts to settle her.

The charge nurse wondered aloud what to do. The resident was inconsolable.

A Jewish Home board member suggested borrowing a cat from the Guild Center, where residents with dementia live. “A cat?” wondered the nurse. 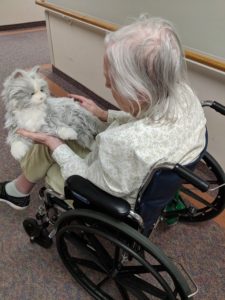 There are five life-size, remarkably lifelike, battery-operated cats living on campus. They purr, meow, blink their eyes, lie back and sit up and do all sorts of cat-like moves. The more they are petted, the more they move. The Guild cats are “working” cats, and they calm agitated residents and keep residents company.

The board member, who was a temporary resident in the skilled nursing facility, had read in the New York Times about robotic cats used in dementia units in Manhattan. According to the article, these cats calmed agitated residents and improved behaviors in residents with dementia. She wanted to give it a try; purchased the first cat and persuaded a few generous friends to donate additional cats to the Harrisburg community.

The charge nurse borrowed a cat. We waited to see what would happen when we introduced the cat to our frightened, screaming resident.

The moment we placed the cat in her lap a switch went off. Immediately, the woman stopped screaming, settled down and engaged with the cat. She remained connected with the cat, petting, hugging, kissing and behaving like a cat lover with a favorite pet.

Allen Geckle, campus CEO, is delighted with the modest yet innovative robotic cat program and the comfort it brings residents. “Our cats are virtually no maintenance, but they provide great results,” he said. “Occasionally a few batteries, no food, no litter boxes, no allergies and many happy and more comfortable residents, happy nurses and happy families.” 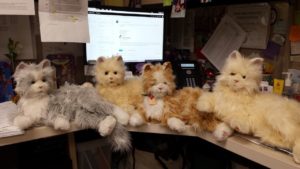 The Harrisburg cats live and work mostly with residents with dementia. However, they are shared with residents in other areas of the SNF who may need calming, comfort or company.
Raw emotions can be a common occurrence, and the robotic cat program has a good track record of helping residents and staff cope.

Later that afternoon, another resident suffering from dementia became upset, agitated and began to scream. The charge nurse, hoping for a response similar to that the first cat elicited, borrowed a second cat from the Guild Center; we watched to see what would happen.

The same exact behavior occurred when we offered the new cat to the resident. In front of our eyes, she settled right down. Since then, she’s often seen holding and conversing with her cat.
Clearly, the reactions we see when we provide cats to residents with dementia prove how hard and how well our cats work. The responses from our residents are virtually identical to responses documented in research on long-term care.

Donors of the campus cats were asked to name their cats, which wear collars and name tags. I LIVE AT THE JEWISH HOME. PLEASE LEAVE ME HERE. And the cats have just been joined by a robotic dog.
The Campus of the Jewish Home hopes that more generous friends will donate more cats!

To get more information on robotic cats, go to amazon.com and search for Hasbro Senior Cats. At last look, the cats cost about $100. The dog costs slightly more. If readers sign their facilities up on amazon.com, and go to the amazon.com/smile page when they shop, Amazon sends their facility a small percentage of the cost of the cat – and anything else they purchase.